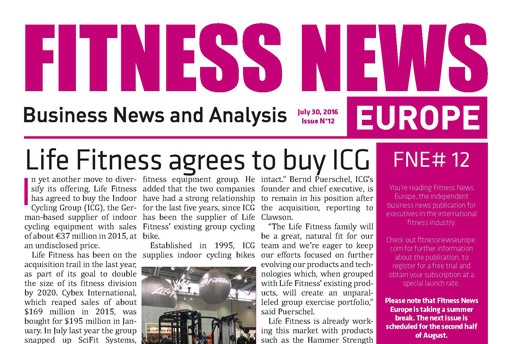 "If Leonardo Giangreco had his way, gyms would com­bine fitness workouts with the fun of playing football. That’s an option with the in­door courts for Jorkyball, a fast-paced ball game that has been spreading in Europe and Asia.

Giangreco is a former invest­ment banker who has been developing Jorkyball courts through 3bble, a Rome-based company. The game is played with two teams, each with a forward and a defender. Gian­greco is targeting gyms with a module of 50 square meters, which is most suitable for clubs with a size of at least 500 square meters.

“It’s a pretty intense game, that allows you to consume cal­ories while playing,” says Gian­greco. “It’s an interesting way for gyms to target a new group of customers and to motivate their members, as it combines physical activity with an ele­ment of competition and so­cialising.”

3bble has already sold the modules to about 40 fitness and leisure facilities around Europe. Some of them use their Jorkyball court to gamify fit­ness activities for their mem­bers, others allow external par­ticipants to play. They usually charge about 5 to 10 euros per person for an hour.

“Most of the gyms charge separately for Jorkyball, so the court turns into a standalone profit center,” says Giangreco. “It’s easy to organise and the profitability per square meters can be very high.”

The courts are most wide­spread so far in Italy and France, because the game was “invented” in 1987 by a French petrol station manager, Gilles Paniez. But in the last two years Jorkyball has increased its reach, through international competitions and the Inter­national Jorkyball Federation (IJF), which currently boasts 12 national members.

3bble has found distribution partners in several European countries, from Italy to France, Poland, Hungary and Malta. They are often involved in the sale of other sports and leisure facilities, such as pop-up foot­ball courts and golf equipment.

Another important ar­gument for some of the gym owners is that the space may still be used when there aren’t any bookings, for example for yoga classes. While the stan­dard 3bble court comes with a metal structure that is only meant to reinforce it, it could be adjusted to allow for sus­pension training.

3bble is currently holding talks to get up to eight courts installed in a leisure facility in Paris, which would serve as its flagship European club.

Giangreco is also targeting potential buyers such as cruise ships and hotels. But he reck­ons that the game is a particu­larly good fit for gyms – all the more so in crowded urban ar­eas where there isn’t any space for five-a-side football pitches.

As a means to increase mo­tivation and participation, Gi­angreco’s company has also developed the 3bble World Ranking Challenge, in which players are ranked individually.

Gym operators with Jork­yball courts in their facility could encourage their mem­bers to subscribe and then organise tournaments that provide points for the rank­ing. Participants may challenge each other, and the more they play, the more points they get. The ranking currently boasts about one thousand players across nine countries.

The court owners may also create customised circuits, which enable them to draw specific categories of players. Some of the organisers get lo­cal sponsors on board to sup­port their competition and ob­tain more exposure.

Jorkyball has its own “pri­vate” international federation in Rome. 3bble is a sponsor and official supplier of the fed­eration, meaning its courts are used exclusively for the Jorky­ball tournaments.

The latest Jorkyball World Cup, held in May in Valenci­ennes, France, brought to­gether 62 teams from 24 clubs and nine countries.

The court consists of synthetic grass, with transparent walls made of plexiglass and blind walls made of sandwiched pan­els. It’s up to the buyers how many of walls they want to be transparent, which makes a difference for the price – from €20,000 up to €25,000 for the fully transparent Aquarius model.

Giangreco says the unit is self-supporting, meaning that it doesn’t have to be fixed to the ground, and may be eas­ily installed and dismantled in one day. The ball is cov­ered with felt and the size of a handball ball.

3bble was established two years ago as a spin-off of World Soccer Ball (WSB), which sells five-a-side pitches. Pierfrancesco Iazeolla, the chief executive of WSB, is Gian­greco’s partner in 3bble."

Tweet
Discover what's happening in 3bble around the world. See all news
Follow Us
Partners
The rules of the game are protected by copyright

Cookies are used on this site to give you the best experience.
You can change your cookie settings or get further information on how we use cookies.
If you continue without changing your settings we will assume you are happy to receive all cookies from our site.
Continue